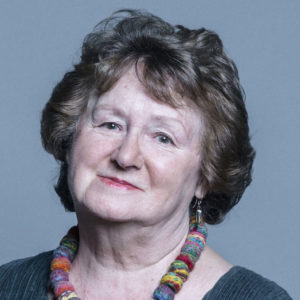 Elizabeth (Kay) Andrews OBE, Baroness Andrews of Southover, was Chair of English Heritage from 2009-2013. She served as Parliamentary Under Secretary of State at the Department for Communities and Local Government from May 2005 – May 2009 and held the position of Government Whip on Education and Health from 2003-2005.

Before being raised to the peerage in 2000, Baroness Andrews was a Fellow of the Science Policy Research Unit at Sussex University from 1968 -1970, Parliamentary Clerk in the House of Commons from 1970 -1985, and Policy Adviser to Neil Kinnock as Leader of the Opposition from 1985 to 1992. From 1992 until 2002, Baroness Andrews was the Founder and Director of Education Extra, the national charity for out of school learning and activities. She received the OBE in 1998 for her work in education.

Baroness Andrews has written books and articles on the history and organisation of science and technology policy, on poverty and social policy, and on education.

She is a graduate of the Department of International Politics at Aberystwyth University and in 2014 became an Honorary Fellow of the University.

Baroness Andrews is the author of a recent report for the Welsh Government on Culture and Poverty (2014) which explores harnessing the power of the arts, culture and heritage to promote social justice in Wales.

She was Chair of Foundations Independent Living Trust from 2010 to 2014 and became FILT’s first patron in 2015.